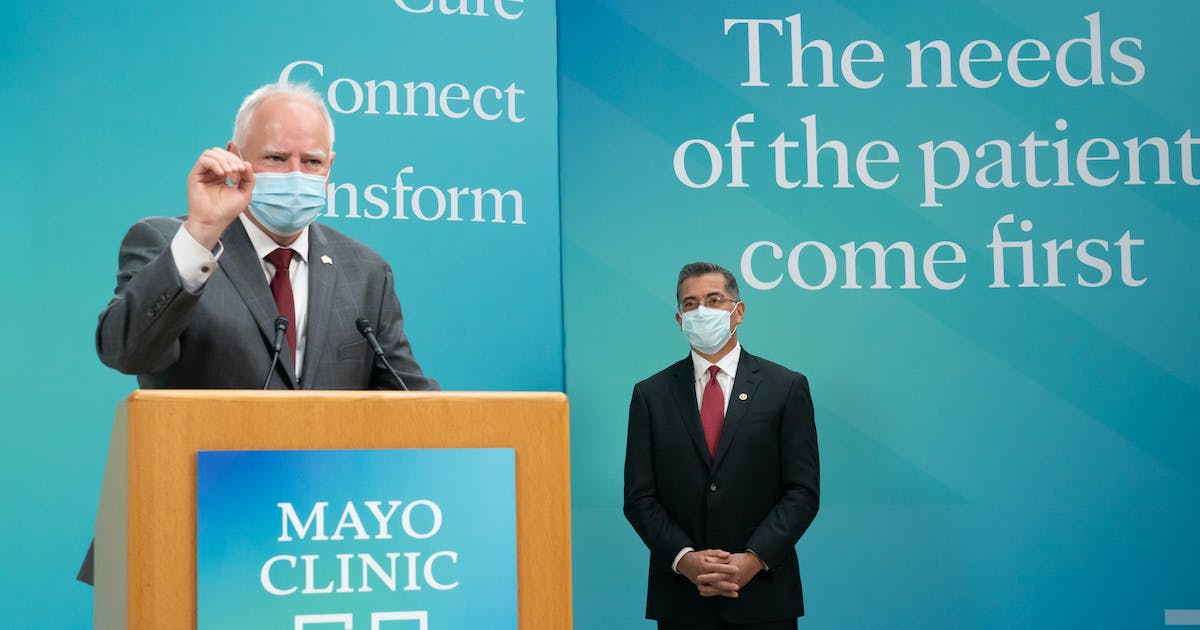 Waning immunity after early COVID-19 vaccinations is helping to prolong the latest pandemic wave, which is lasting longer but hasn’t been as severe in Minnesota as it was in the South this summer.

State leaders on Wednesday urged unvaccinated Minnesotans to seek shots and vaccinated people to seek booster doses when recommended to increase their protection against COVID-19.

While infection numbers in Minnesota would be “astronomical” without vaccines, Gov. Tim Walz said waning immunity is “starting to have an impact” along with the changing of the seasons that is driving people indoors and increasing viral spread.

“Most of our folks were vaccinated, especially our most vulnerable, over eight months ago, and the recommendations, of course, are now to get the boosters to get the immunity up again,” Walz said.

Even with more than 3.4 million people fully vaccinated, Minnesota on Thursday reported a 9.3% positivity rate of COVID-19 testing, indicating widespread viral transmission. COVID-19 hospitalizations in the state reached a 2021 high of 1,159 on Tuesday.

The state is opening a 34-bed alternative care site at Good Samaritan Society-Bethany in Brainerd, giving hospitals a place to transfer patients who no longer need inpatient care but are too frail to go home. The first site at Benedictine St. Gertrude’s in Shakopee had 23 patients Tuesday and was expected to reach full capacity at 30 this week.

More infections with a fast-spreading delta variant of the coronavirus could strain hospitals even further, state Health Commissioner Jan Malcolm said. “We’ve been talking about the delta wave since midsummer, but right now we find ourselves in really, truly, an alarming spike in cases.”

The state Department of Health on Wednesday reported 5,277 infections and 43 COVID-19 deaths, raising the state’s totals to 831,669 infections and 8,925 deaths. Wednesday’s report included 16 deaths of residents in long-term care facilities, which received early access to the COVID-19 vaccine last winter and are being prioritized for booster shots.

Minnesota has the sixth-highest rate among states of new infections over the past seven days, according to the Centers for Disease Control and Prevention, while states such as Florida have the lowest rates after severe COVID-19 waves this summer.

Florida, at its peak in mid-August, reached a seven-day new infection rate of 704 per 100,000 people while Minnesota just reached 379, according to CDC data. However, the delta wave rose and fell in Florida in five months, while infection numbers slowly crescendoed in Minnesota.

“In Florida, they did not do anything to slow down infections,” said Ali Mokdad, professor of health metrics sciences with the Institute for Health Metrics and Evaluation (IHME) in Washington state. “They let it go. Basically in Florida, it spread so fast, much faster than you are seeing in Minnesota, that it ran out of people to infect.”

IHME estimates that 40% of Minnesotans are unprotected because they never sought vaccination or their immunity from earlier shots or infections has waned.

“That will sustain a surge,” said Mokdad, although IHME predicts Minnesota’s infection rate will peak Tuesday.

Besides waning immunity, mitigation strategies such as mask wearing and social distancing declined in Minnesota — especially after Walz lifted an indoor mask-wearing mandate in May. While 79% of Minnesotans reported they always wore masks in public in February, according to survey data, the rate has dropped to 23% and is below the U.S. average.

Minnesotans felt “invincible” when the pandemic receded in June, said Kris Ehresmann, state infectious disease director, but they might need to go back to masks, social distancing and frequent testing and think about how to reduce viral risks when families gather for the holidays.

State leaders are encouraged by rapid uptake of boosters, which are recommended to all recipients of the Johnson & Johnson vaccine and to recipients of the Moderna and Pfizer vaccines who are seniors or younger adults with health problems or occupational risks for viral infection. The state ranks fifth, according to CDC data, with more than 20% of fully vaccinated Minnesotans 18 and older receiving boosters.

Minnesota has reported 64,844 breakthrough coronavirus infections in fully vaccinated individuals. Many involve elderly or other high-risk people who were prioritized for vaccine more than six months ago, Ehresmann said.

“That six-month time frame is where we start to see a drop-off. … That’s why we are really encouraging people who are eligible to take advantage of those boosters,” she said.

“The fact that it is so safe and well tolerated certainly is reassuring,” said Dr. Andrew Badley, a Mayo infectious disease expert who co-wrote the paper, which was released online this week before publication in a peer-reviewed journal.

Studies have found that the COVID-19 vaccines have lost some effectiveness at preventing infections but remain protective against severe illness, hospitalization and death.

Paul Hoisser, 67, of Minneapolis, figures he is a case study. He tested positive for a coronavirus infection this week despite receiving a booster in October. While he couldn’t taste the cornbread he ate Wednesday, his COVID-19 symptoms were mild.

“I’ve got a couple underlying health problems,” he said. “I believe had it not been for the vaccine and booster, I would have been in a lot worse shape.”

Observational data from Minnesota hospital systems support the protective effect of vaccines. Sanford Health reported Tuesday that 21 of 184 COVID-19 patients admitted to its hospitals in Minnesota and the Dakotas were vaccinated. Among 61 patients requiring intensive care, only five were vaccinated.

A year of innovation in vitamin, mineral, and supplements,…

Israel doubles down on booster shots as daily Covid cases…

Everything you need to know about the Pfizer/BioNTech…

How to Read Supplement Labels Like a Pro – Healthline

What is Japanese Diet Pu-erh Tea? Explained in One Minute