Will getting a breakthrough case of COVID-19 boost your immunity without a third shot? – The Philadelphia Inquirer 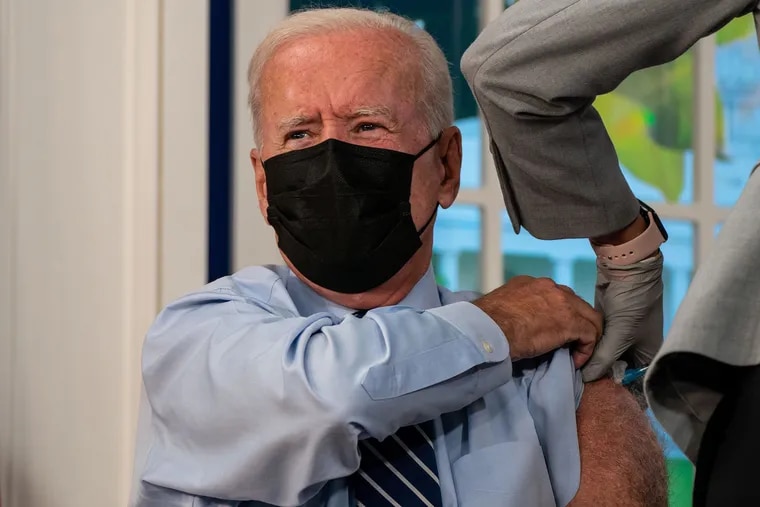 At this point in the pandemic, many of us know someone who was vaccinated against COVID-19 but developed a breakthrough case of the disease.

Most such cases are mild by doctors’ standards, meaning they don’t put people in the hospital, but they can still leave some virus victims feeling pretty sick.

Could these cases have benefits? An important question is whether they can boost protection against future exposure to the virus.

Data on the impact of breakthrough cases on immunity are not yet available, but experts said there’s reason to believe infection after vaccination would improve immune response to future viral assaults. How strong that effect is and whether it’s equivalent to getting another shot remains to be seen.

First, it was always expected that some vaccinated people would become infected. From a public health perspective, the crucial role vaccination plays is in reducing deaths and demand for hospital beds. The vaccines are still working well from that standpoint. Even when vaccinated people do become infected, they are less likely to spread the virus, because their viral load drops quickly.

The numbers of breakthrough cases, however, increased when the delta variant became the predominant virus.

The CDC recently recommended that some groups, including people 65 and over and the immunocompromised, get a third dose of the Pfizer vaccine. Moderna and Johnson & Johnson are seeking approval for boosters as well.

» READ MORE: What are the symptoms of breakthrough COVID-19? And did I have it?

Researchers have studied what happens when people get vaccinated after having had COVID-19. That results in what’s called “hybrid” immunity, and it is stronger than immunity achieved by either natural infection or vaccination alone, said Alessandro Sette, an immunologist at the La Jolla Institute for Immunology.

“It is reasonable to think that the same would happen if you reverse the order, but it’s not necessarily so,” he said.

The doubt exists because breakthrough cases are not the same as infections in the unvaccinated. Sette said this stems from the fact that COVID-19 is like two diseases, one of the nose and one of the lung. Infection starts in the nose and usually stays in the upper respiratory tract for a while. Then it moves to the lower respiratory tract and, sometimes, other parts of the body.

In vaccinated people, the amount of virus in the nasal area can be similar to that found in the early days of infection in unvaccinated people. But the infection-fighting properties of vaccines often kick in fast enough to prevent the second, more dangerous phase of illness in the lower respiratory tract.

It is possible that this less dramatic infection dampens the amount of long-term immunity. Sette said it is likely that breakthrough cases provide some boost, but he doesn’t know how big it is.

Amesh Adalja, a fellow with the Infectious Diseases Society of America and senior scholar at the Johns Hopkins University Center for Health Security, said he expects that hybrid immunity will be stronger, regardless of the order of vaccination and natural infection.

Marci Drees, chief infection prevention officer and hospital epidemiologist for ChristianaCare, expects that breakthrough infection is much like a booster, because both expose a pre-primed immune system to all or, in the vaccine’s case, part of the virus and ramp it up for a while.

One possibility, Sette and Adalja said, is that the people who get breakthrough cases have problems with their immune systems that might also affect their response to natural infection. Adalja thinks that’s unlikely. “I’m someone who thinks that everybody is going to get a breakthrough infection somewhere down the road,” he said. “The goal is to have that be a mild case.”

Drees agreed. “If you have a breakthrough case, it doesn’t mean that you have a faulty immune system, because none of these vaccines are 100% [effective],” she said.

Adalja sees no harm in still getting a booster after a breakthrough case if you’re eligible. Sette would go for the extra insurance. “If a booster shot is indicated for someone, I would totally get it, regardless of breakthrough infection,” he said.

Drees said the science is most clear that people who are 65 and up or are immune compromised will benefit from boosters. “For most younger groups, it’s still unclear to what extent a booster is even needed at this point,” she said. Asked if people who know they have had breakthrough cases should also get boosters, she said, “I don’t think that’s an answered question yet.” She would probably still recommend a booster for older people.

Sette said people should beware of assuming they’ve had COVID-19 without confirmation.

He said it is much easier to study people who get COVID-19 and then are vaccinated than the reverse. That’s because researchers know who was sick. They can’t predict who is going to get a breakthrough case.

Drees said researchers also have no easy way to know how well people are protected. “This is all limited by the fact that we don’t yet know what antibody level means you’re protected,” she said. Experts know that other parts of the immune system are also important, but they are even harder to study.

John Zurlo, an infectious diseases doctor at Jefferson Health, said Jefferson researchers are studying the immune reactions of vaccinated workers who get breakthrough cases. He hopes that will help reveal a “correlate of immunity” that can be readily tested. That would make it easier to answer questions like these in the future.

The Most Popular Supplements, Says Latest Survey | Eat This…

CDC finds immunity from vaccines is more consistent than…

Will we need COVID-19 booster shots? Increasingly, the…

7 Foods That Are High in Magnesium – Health Essentials…